STRENGTH THROUGH LIFE’S JOURNEY – Hi my name is Ilyambabazi Sebyeza and I am a burn survivor. Four years ago I was injured in a fire accident at my home. My face was the most affected. The nature of my injury was a bit of 3rd, 2nd, and 1st degree burns. My first week at the Burn Unit was filled with pain; which the magic of pain killers made bearable, coupled with the abundant TLC provided by the nursing staff, and the unconditional love and support of my family and friends.

By the end of the first week most of my wounds were healed, except for the areas that had suffered deep burns. At the beginning of my second week in the Burn Unit I was suddenly informed that I was being discharged the same day; however, it turned out that there was a mistake and my actual day of discharge ended up happening two days after. I generally didn’t take my discharge very well because I felt that I still needed specialized care as the more deeply burned areas on my face were still unhealed; the hospital staff convinced me that it was much safer for me to be at home rather than the hospital due to the prevalence of super bugs in hospitals.

In spite of my reservations about being discharged early, I was glad to be going home. My son, who was 7 at the time of my accident, was very happy to have me back home; his little world had been rocked by my injury, and to have me back home was a reassurance that I was okay, and everything would get back to normal. My parents and siblings were also very helpful in doing things that I couldn’t do for myself; but other than needing help with major physical tasks, from my first day of returning home I did all my own house chores and did errands outside of my home. Keeping active was my way of preventing me from focusing on the aches and pains of my injury.

For treatment I continued to get assistance from a local community nurse’s agency, in addition to a weekly visit to the out patient VGH Burn Clinic. Close to the third week of my being at home, one of the community nurses that visited me suggested that I start attending the North Shore Wound Clinic on Commercial Drive and 1st Avenue; up to this point there seemed to be a setback in my healing and the doctors were beginning to suggest surgery. My preference was to give my body a chance of healing itself before opting for surgery; the doctors, though, felt that my healing was taking longer and that put me at risk of infection. I totally understood the concerns of the doctors and I was just as concerned too; however, I believed that my body could heal itself given time; so I decided to take a chance and avoid the surgery for the time being, as I started to receive treatment at the local wound clinic.

My feeling was that the only medication (polyspun) that was being used on my wounds was not helping me any more, and it was actually making my wounds worse; when I expressed that concern to the wound clinic staff on my first visit, the nurse on duty immediately suggested an alternative in the form of an anti fungal silver fabric. It took me a few days to get used to the anti fungal dressings as they got very dry in the wound, and thus required to be kept moist to avoid discomfort. For the two and a half weeks that I used the anti fungal dressings, I spent many sleepless nights waking up to moisten them; which left me very tied, but there was a pay off, as after one week of using the dressings, I started observing signs of healing. By the third week of using the anti fungal dressings all my wounds were healed; this allowed me to start the process of being fitted with the facial mask, which would help my skin to heal better.

The facial mask stage in my healing brought its own challenges, more so because I started wearing it during summer; not to mention the stares that I got that made me feel like a freak. The stares were the least of my worries though; my main concern was the discomfort it caused me when I was sleeping, which led to me being fatigued most of the times. But like everything else, it was just a matter of learning how to adapt to the mask; and how I went about that was by treating the mask as that bitter pill that I had to religiously swallow, simply because it was going to cure me. Soon the mask became part of my daily attire, such that at times I forgot I had it on. People in my neighborhood got so used to seeing me with the mask that they never stared any more; I actually made some friends, mostly children and their parents who would stop me wanting to know about the purpose of the mask. I wore the mask for one and a half years; during this time I chose not to go back to work so as to give myself enough time to heal better. I took this as an opportunity to empower myself more physically and intellectually by taking membership at a neighborhood gym, where I started exercising thrice a week, and also joined their book club. Shortly after I also enrolled in an administrative assistant diploma program to improve on my computer skills and learn other things in the process. Like the saying goes, “there is a silver lining to everything”, during the time of my injury I did more things towards my own self care than I have ever done before.

People who know me often tell me how I did well during the time of my injury; and I believe that they are alluding to the fact that I never complained or whined about my situation. The truth is that I had my “why me moments” and I still do sometimes when I look at the scares on my face; however, my feeling sorry for myself moments were, and still are, far out weighed by more pressing issues. Most important for me is the well being of my son and that surpasses anything. At my lowest moments during my injury, being the only parent in my son’s life is what gave me the strength through my journey of healing. I believe that we are all blessed with the ability to be resilient when the going gets tough; however for that resilience to come into play for some of us, we need to believe that there is a purpose in our existence, beyond just our physical appearance. In my case I strongly believed that I had to be strong for the sake of my son and that helped me to endure the stressful moments of my injury. For those of you that are in the early stages of dealing with burn injuries I wish you a speedy recovery. 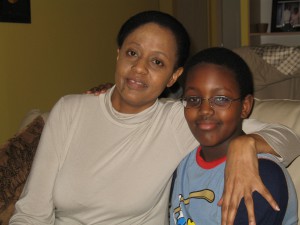